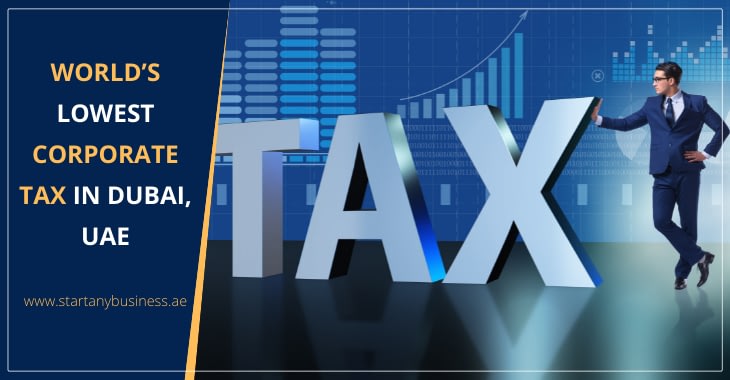 The UAE, most popular for its history of economic development, has revealed schemes to apply a federal corporate tax on corporation profits. The people who looking for company formation in UAE need to understand that the UAE finance ministry would form a new corporate tax on the revenue of multinationals, as part of a wider tax overhaul.

These significant gains would open a new door of financial development for corporations and in coming years, this change can confirm to be a huge benefit for overseas business people. The 9% corporate tax on corporations is the lowest in the world. Hence, big multinational corporations must prioritize the country to spread their new branch.

What Is The New Corporate Tax And Why Implement It?

All corporations in the UAE with revenue overextending AED 375,000 annually, would require to make the payment of 9% federal income tax. Hence, new Dubai company formation, small income corporations, and startups would face any impact by this transformation. As per the tax foundation, the worldwide average corporate income tax is 23.5%. Hence, the corporate tax in UAE would be among the lowest across the world.

It won’t assist the UE to expand its economy, but also adapt to global standards. Another current revision of weekend move from Friday and Saturday to Saturday and Sunday is an instance of how the nation is on its method to coming at par with greatly increased economies.

The highlights of New Corporate Tax in UAE

Because of advantageous tax rules in most GCC countries, the GCC remains a lucrative jurisdiction for overseas investment. Although, many reforms are in the works to produce new profits creeks while decreasing the region’s reliance on conventional profits sources. Following are the highlights of new corporate taxation –

Individuals would constantly be free from taxation on profits from work, equity investments, real estate, and other sources of personal profits not tied to a business of the UAE. Hence, the personal profits tax rate in the country yet rests at 0%. Overseas business people who don’t operate the company in the nation would be also free from the UAE corporate tax.

Loss utilization rules would be helpful in the country’s corporate tax structure. In addition, the UAE groups would be taxed as a sole unit. They can also utilize collective relief for losses, reorganizations, and intra-group transactions.

The UAE corporate tax would make sure that adherence prices are as low as possible for multinational companies that grow and sustain the right financial status. The corporate tax would be applied to the profits of corporations in the UAE as reported in their financial records. In addition, the statement must be ready by globally acknowledged accounting norms, with exceptions and adjustments.

With the exception of the exploitation of natural resources, which would constantly be taxed at the emirate level, the corporate tax in UAE would be a levy on all corporations and business activities.

Multinationals will just have to file one corporate tax return every financial year. Moreover, they would no longer need to make upfront tax payments or make temporary tax filings. With respect to the OECD transfer cost approaches, UAE corporations would be subject to transfer cost and paperwork needs.

How Will the UAE Tax Regime Benefit Small Businesses

Several people think small company formation in Dubai is an important basis of job design and technical creation. The owners of small corporations have been long lauded for their contributions to the economy in the country.

Corporate concentration is responsible for the decreasing efficiency development and the economy’s decreasing in usual. Net income and market capitalization are allocated more evenly among the biggest entities. The increasing concentration reveals that large corporations increase costs while reducing wages, giving low-quality goods and services, and limiting output. Huge corporations and multinationals would be affected by the taxation in the UAE, but small corporations would advantage from the extending economy.

Corporate competition connects to increasing imbalance and huge businesses, rising political weight, moreover to stifling competition. The concentration of capital and influence of some big entities can infuse a feeling of dissatisfaction among small corporations.

Corporates are provided credit for rising competition and improving customer welfare because of their capability to use economies of range. Huge corporations’ rising productivity as compared to their smaller peers is popular. The new tax regime and VAT services Dubai would support small corporations to stand out in the market.

How To Get HR Consultancy License In Dubai

What Are The Ways Of Financial Business Setup In Dubai

Start Any Business Has Signed A Partnership With Passport Legacy