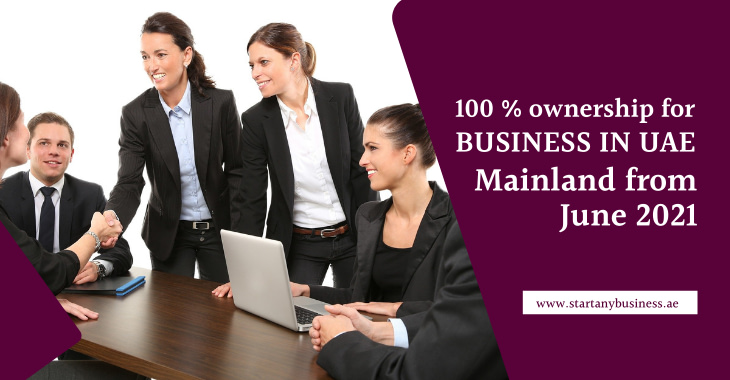 Dubai Economy Ministry announced on that the pre-announced Commercial Companies Law would come into force from next 1st June. It will permit 100% ownership for business in UAE mainland from June 2021.

As per the previous announcements, all existing and pre-licensed businesses in the UAE may amend their positions as per the new amendments to the law of commercial companies. In December 2020, the government of the UAE announced key changes to Federal Commercial Companies Law No.2 2015, leading to changes in foreign ownership regulations implement to commercial companies.

What Are The Changes?

According to Law No.2 of 2015 of the Commercial Companies Law, foreign shareholders were limited to owning a maximum of 49% in a ‘Limited Liability Company’ conducting as an onshore UAE trade. It demands an Emirati person or 100% Emirati-owned company to manage the remaining 51% share as a local sponsor.

In other firms, certain categories of foreign businesses were required to have a local service agent who won’t have any shares, but remuneration would be given as a part of the business setup contract.

The amended law permits the legal and natural individual to set up and hold 100% share in their companies regardless of nationality. However, the law would not apply to certain companies that are excluded cabinet decisions and which are wholly owned by either the federal or local governments or their subsidiaries.

Economy Minister Abdulla Bin Touq Al Marri said the amended law is a new phase that shows the importance of the government of the UAE supporting the national economy in its different sectors and increase its readiness for the future.

“The legislation is in line with the broader vision of the UAE to strengthen its status as a global investment destination,” he stated.

The ministry stated that the UAE understands the importance of encouraging entrepreneurs and investors, as well as their important role in achieving economic growth. “We are willing to offer a flexible and integrated investment atmosphere that enables them to applicable important projects which support the national economy,” said Al Marri.

He also stated that the law supports flexibility and openness in the law to offer an economic environment in line with the recent and the best investment practices. This also makes it easier to establish and trade in the UAE and allures foreign direct investment in various important regions.

The move aims to increase the attractiveness of the investment atmosphere through flexible and open law to offer a business-friendly atmosphere in adherence to the best international investment practices, in preparation for the next 50 years.

NOTE: UAE announce 100 % ownership from June 2021 for these activities – check All The Activites Here

UAE Sets Out Legal Overhaul Of Personal And Family Law