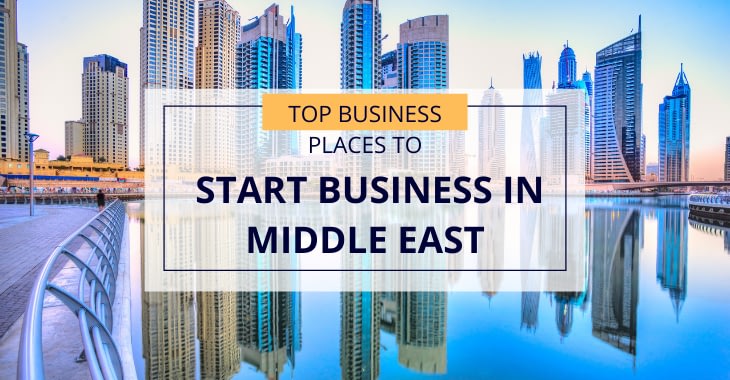 The Middle East region have seen a massive change in recent years, leaning more towards favorizing and supporting businesses, startups, and entrepreneurs. There are many top business places to start business in Middle East. The region has a lot of potential as the number of entrepreneurs is increasing because of the promising startup ecosystem. For those who want to start their own business, and looking for an appropriate place in the Middle East.

Dubai has established itself as an emirate and city based on its industry of oil and fueled its current success as a cosmopolitan metropolis. It is one of the top business places to start business in Middle East. The largest sources of revenue are currently real estate, various financial services, construction, and information technologies. As a result of a construction boom that prompted the construction of the Burj Khalifa, the current tallest building in the world, Dubai boasts state-of-the-art infrastructure and also advantages greatly from extensive telecommunications and extensive connectivity. As we know Dubai is known as a business hub. So, it is a great place to do business.

Doha, the capital of the peninsula and the state of Qatar, another option while choosing a location to start a business in the Middle East and North Africa. Qatar recently has the third-largest GDP per capita in the entire world with 1.8 million citizens as of 2013, 1.3 million live in Doha. All of the top business partners of Qatar are Asian nations, making Doha a major place for business targeting Asian Markets.

Abu Dhabi is another top business places to start business in Middle East. The emirate independently has one of the greatest GDPs per capita in the world and is recently the very richest emirate in the country. Abu Dhabi is also a city of great economic importance. Abu Dhabi is a tax-free and duty-free city, making it optimal for extensive trade, specifically as the Emirate of Abu Dhabi repatriates all of the profits from overseas venture to the owners without holding any of the revenue.

The largest share of Cairo’s revenue comes from the service industry, especially tourism. In addition, Cairo also has a large construction and heavy industry sector, which means textiles, hydrocarbons, etc. the latter industry advantages from the Qualifying Industrial Zone (QIZ) of Cairo, is a tax-exempt industrial park. The area, created in collaboration with Israel, permits businesses in Cairo to advantage from US and Israel free trade contracts. The way the zones were designed, a portion of all zone-produced goods should have Israeli input, but nearly all items produced in the QIZ can access US markets without the imposition of tariffs on them and the quotas attached to them.

The capital of one of the world’s richest countries, Riyadh is an economic titan and Saudi Arabia’s most prosperous city. The average GDP per capita is equivalent to around 32 thousand USD, making it an excellent option for choosing to do business in the Middle East. Riyadh benefits from trade contracts with many countries, including the US. In fact, Saudi Arabia is the United States’ biggest trade partner in the Middle East.

Bahrain’s capital Manama is another excellent choice for doing business in the Middle East. It provides more extensive ownership rights than regional standards, permitting foreigners to unexceptionally fully ownership of their companies. Non-nationals are still not permitted to own property or land, except in some specified areas. Luckily Manama, and Great Manama, are one of these areas so you can buy real estate there. These make Manama one of the easiest locations to do business, without the constraint of having a business partner that is a national one.

The coastal city of Jeddah in Saudi Arabia is the Kingdom’s gateway to the Red Sea, and probably yours too. The strategic and economic importance of Jeddah to the KSA is evident from the increased investment by the Saudi government in the city to develop a new port and to transform the city into a very powerful regional trade center for the more prominent Persian Gulf trade. This is also evidenced by the current construction of the Kingdom Tower, which will be the largest building in the world upon completion, and Kingdom City, a construction project designed for the economic and social development of the country.

The largest component of Beirut’s GDP is in banking and finance. Beirut benefits from a free banking area, which was established to permit the free exchange of currencies, making the Lebanese Pound an incredibly flexible currency. The second-largest component is tourism: Beirut’s excellent location on the Mediterranean Peninsula makes it a hotspot destination for Arabs, Europeans, and people all over the world.  These are the top places where you can start your business in the Middle East. These all locations will delight you and your business. We hope these places will inspire you.

Also Read:- How Non-Residents Can Open a Bank Account in UAE?

A knowledgeable and active member of the business community in the UAE and advises large multinationals as well as startups on how to best establish a commercial presence in the UAE.
admin@startanybusiness.ae

How To Start A Tax Consulting Business In Dubai