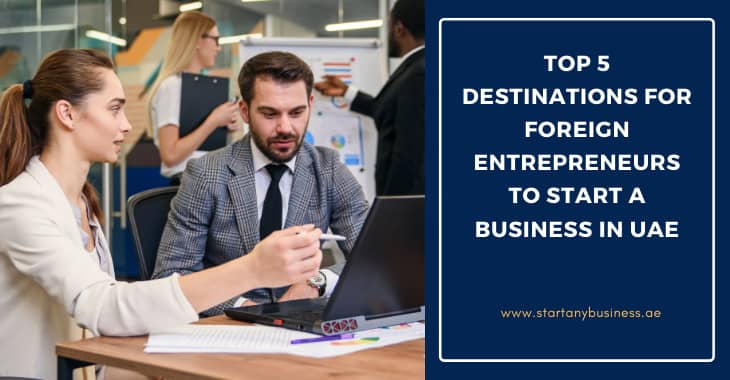 The Middle East is marked as a global hub for all things trade and the UAE has been ranked 13th globally as per the latest report. As a result, the report noted that the UAE ranked highest in the Middle East Countries. That’s why a lot of people want to work here. Here we brought the top 5 destinations for foreign entrepreneurs to start business in UAE. If you are interested to start a business or company in the UAE then this is the right time to take pleasure in the best business city’s environment and make your dream business successful.

The United Arab Emirates, instead of having the best infrastructure and the most suitable transportation policy in the world, also has the very technologically advanced amenities identified to man. The UAE government aims to establish such an investor-friendly atmosphere that overseas investors, both small and big, locate it an attractive location to begin a business. And in current times, a lot of overseas entrepreneurs are doing investments in the growth of its infrastructure.

Several government reforms like state-led privatization in the nation, have turned the UAE into a popular destination. And created the UAE for people to invest in businesses and entrepreneurs around the world. In addition, there has been remarkable advancement and developments in the field of renewable and sustainable energy. The above report states that there are several wind, solar, and hydropower projects in the works that would reduce the country’s energy dependence on the oil and gas sector in the future.

Because of the many advantages specified earlier, setting up a business in the UAE is not at all unreasonable. Instead, a venture into the globe of entrepreneurship in the United Arab Emirates is considered highly profitable and feasible. As the UAE extends incredible support to budding overseas business people, the likes of which are unheard of. Here we present certain spots in the UAE, that are most convenient for an overseas person who is willing to establish a business in the United Arab Emirates.

Dubai is the most famous city in the United Arab Emirates. In the late 1980s, modern was set up with revenue produced from the oil and gas fields. Dubai government gradually realized the benefits of diversifying its income sources, and today below 5% of the revenue of Dubai comes from the oil and gas industry, and it accounts for only 8 percent of Dubai’s overall GDP. Dubai’s strategic locations and the availability of several Dubai-free zones make it an attractive and hard-to-miss choice for business owners and overseas investors.

After Dubai, it is the most famous and excellent pick for an overseas person to begin a business in the UAE. Abu Dhabi is the most prosperous and the richest city in the UAE. When examined individually, this has one of the strongest GDP per capita growth rates across the globe. With over a trillion dollars invested in Abu Dhabi, this is an essential hotspot for overseas business people, investors, and entrepreneurs who are looking for new horizons to set up a business.

Historically, the Deira district was the commercial and financial center of Dubai. Nevertheless, with the latest developments near Sheikh Zayed Road, the city is steadily losing the significance and value from which it has been sustained. Nevertheless, in recent years, the city of Deira has been encouraged by the construction and expansion of the metro, the construction of several shopping malls in the region, and the growth of Port Saeed near Deira’s banks of the Dubai creek.

Business Bay, as the name suggests, is a business community, and parts of the site are yet under development. After its achievement, the Business Bay would have over 200 and 50 high-rise buildings, which would be used for both commercial and residential purposes. The Business Bay would cover 4,370,000 square meters, of which 7,280,000-meters square would be prepared for renting and leasing out. The entire area will include one Bay Square, 12 executive towers, and Bay Avenue.

Al Karma is a provincial district of Dubai and is composed of a framework system. This constitutes several low-rise residential frameworks like houses and apartment buildings, and even though the sector of Al Karama is less than 2 sq km, this is still capable of accommodating over 50,000 people. Transportation to Al Karama is great and easily available, making it very convenient for people to travel. This is an outstanding location to establish cafes and restaurants, shopping malls. The proximity to several hotels, and quick and convenient transportation, makes it a pleasing location, specifically if an expat wishes to begin a business in the United Arab Emirates.

What are Ways for LLC Company Formation in Dubai

How to Start a Textile Business Setup in Dubai

Know Everything About Business Setup in Dubai